The island is of volcanic origin, mostly made of fissure vents. Gran Canaria is the most populous island of the Canary Islands. Gran Canaria's surface area is 1,560 km² and its maximum altitude is 1,949 meters (Pico de Las Nieves). It has a round shape, with a diameter of approximately 50 km.

Gran Canaria is noted for its rich variety of micro climates. Generally speaking though, the average daytime high ranges from 20°C in winter, to 26°C in summer. Annual rainfall averages 228 mm, most of this falling in the cooler months, with July, August and September normally rainless.

This island is called a "Miniature Continent" due to the different climates and variety of landscapes found, with long beaches and dunes of white sand, contrasting with green ravines and picturesque villages.[7] A third of the island is under protection as a Biosphere Reserve by UNESCO. 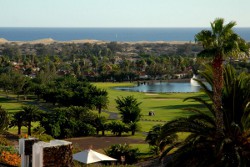 The number of annual visitors is 2.2 million (2,200,000). Most of the tourists visit the southern part of the island.

The north tends to be cooler while the south is warmer and sunny. The east coast of the island is flat dotted with beaches while the western coast is rockier and mountainous.

Most tourists stay in the south of the island, which is sunnier and has less rain than the north. In the south there is a large bird park, Palmitos Park, as well as many beach resort communities. Resorts are concentrated in the central eastern part of the southern coast in the Maspalomas area, which includes the towns of San Agustín, Playa del Inglés, Sonnenland, Maspalomas and Meloneras. The Dunes of Maspalomas are located between Playa del Inglés ("The Englishman's Beach") and Maspalomas. Another tourist attraction is the lighthouse at Maspalomas situated at the western end of Maspalomas.

The magical island of Gran Canaria has 230 kilometres of coastline and some of the most beautiful beaches in Europe. Big ones, small ones, sandy ones, rocky ones, they come in all shapes and sizes and provide the perfect setting for a fun-packed holiday in the sun. 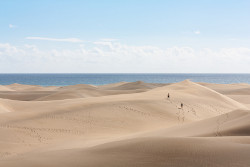 Gran Canaria has a variety of beaches to suit all tastes. There are beaches for young families, naturists, gays, watersports enthusiasts and plain old sun worshippers! The most popular tourist beaches can get over-crowded but if you\'re seeking a secluded spot there\'s enough sand on this coastline to give everyone their own bit of space.

Playa del Ingles, in the south of the island, is probably the most famous beach in the whole of the Canarian archipelago and is also one of the busiest throughout the year. It stretches for nearly three kilometres and is lined with bars, restaurants, hotels and shops.
SOME DATA

The Real Invest Gran Canaria team is adapting to our clients´ needs, and we will therefore offer property ads with 3 dimensional virtual tours/videos, 3D plan documents and 360º photos more and more frequently, as well as live viewings through video phone calls.

We also want to underline that we follow protocols for safety and hygiene on viewings, in the office and for client meetings in general to make everyone feel secure.

Most properties in the south of Gran Canaria can be sold through us and the broker´s fee is included in the purchase price. As a member of the real estate organization "ACEGI", we have access to properties through other agents and therefore we can help you to find exactly what you want, with no extra cost.

Real Invest GC is run by law school graduate and property consultant, Sunniva Torset, specialized in international contract law. Our clients also have access to a Spanish lawyer who speaks English to avoid misunderstandings and to legally secure the purchase and the payments.

We have a very visible and well-visited office in a central location in the Ancora Centre, Arguineguín.

Real Invest GC is a well-known name in the business, and we were specifically highlighted in the public meeting between the Norwegian and Canary Chamber of Commerce as an example of foreign investment. We have also participated in several TV programs, such as "Sold" at NRK in Norway and the English "A place in the sun".

We are known to have high moral and ethical standards, exceptional local and market knowledge, and we participate actively in courses to assist our clients with efficient and problem free transactions. We have gained a very good reputation after more than 10 years in the industry. Here you can read some of our references.

The management board/governing body of REAL INVEST GRAN CANARIA, S.L. (hereinafter referred to as the data controller) assumes full responsibility for and provides its full commitment to drafting, implementing and maintaining this Data Protection Policy, ensuring continuous improvement on the part of the data controller with a view to achieving excellence in compliance with Regulation (EU) 2016/679 of the European Parliament and of the Council of 27 April 2016 on the protection of natural persons with regard to the processing of personal data and on the free movement of such data repealing Directive 95/46/EC (General Data Protection Regulation) (OJEU L 119/1, 04-05-2016) and with Spanish legislation on the protection of personal data (Spanish Organic Law, specific sector legislation and the implementing regulations).

The REAL INVEST GRAN CANARIA, S.L. Data Protection Policy is based on the principle of proactive responsibility, according to which the data controller is responsible for ensuring compliance with the regulatory framework and case law that governs the Policy, and is able to prove this before the competent supervisory authorities.

The data controller is governed by the following principles that should serve as a guide and frame of reference for all of its staff, with regard to the protection personal data:

The REAL INVEST GRAN CANARIA, S.L. Data Protection Policy is distributed to all staff under the authority of the data controller and made available to anyone interested.

Consequently, the present Data Protection Policy involves all staff under the authority of the data controller, who must be familiar with the policy and take ownership of it; every single one of them is responsible for applying and verifying data protection regulations in their course of their work, as well as identifying and creating opportunities for improvement as appropriate with a view to achieving excellence in compliance.

This policy will be reviewed by the management board/governing body of REAL INVEST GRAN CANARIA, S.L. as often as necessary to ensure compliance with the provisions in force on the protection of personal data.

In Spain and the rest of Europe, there are data protection regulations in place designed to protect your personal data that, as a company, we need to be compliant with.

That is why its important to us that you clearly understand what we do with the data we request.

We will be transparent and ensure you have control over your data, using plain language and clear options that will allow you to decide what we are allowed to do with your personal data.

If anything is unclear after reading this information, please dont hesitate to contact us.

Thank you for your cooperation.